Samsung’s 7000mAh battery is getting cheaper than 7 thousand … 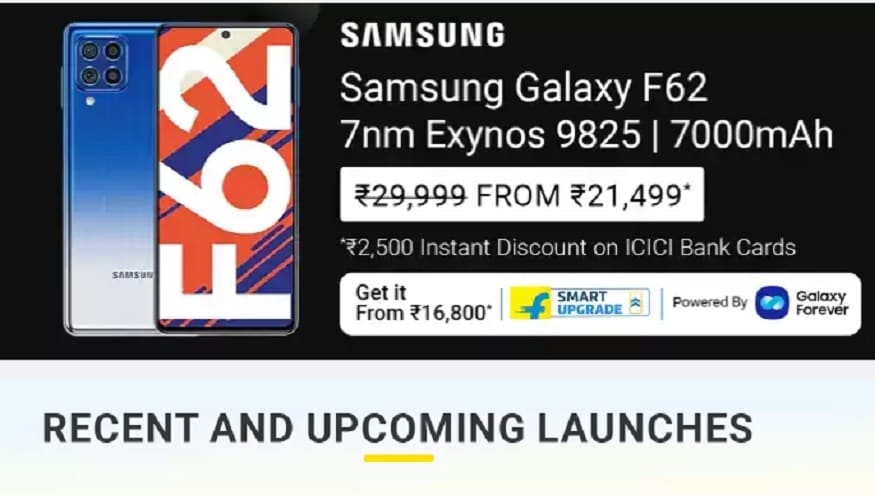 If you are planning to buy a new smartphone with a strong battery, then Samsung Galaxy F62 with 7000mAh battery can be a good option for you. Actually Samsung’s Galaxy F62 (Samsung Galaxy F62) is being given a very good deal. This Samsung phone comes in two storage options – 6GB RAM + 128GB and 8GB RAM + 128GB variants. Its base variant costs Rs 23,999. At the same time, the price of its high end variant is Rs 25,999.

The phone has been made a banner on Flipkart, according to which the starting price of Samsung Galaxy F62 has gone up to Rs 21,499. Under the ICICI Bank card on the phone, an instant discount of Rs 2,500 is being given on it. Not only this, under the Flipkart upgrade, the phone can be brought home for just Rs 16,800. That is, a total discount of Rs 7,199 will be available on its initial price.

(Also read- By spending only Rs 125 a month, the hassle of recharge for a year ends! Free calling and many benefits)

The phone is being given cheaply through Flipkart Upgrade. (Photo: Flipkart)

Samsung Galaxy F62 has a 6.7-inch Super AMOLED + Infinity-O display. The company’s Exynos 9825 processor has been given in the phone.

As a camera, quad rear camera setup has been given in Galaxy F62. It has 64 megapixel primary camera, 12 megapixel ultra-wide, 5 megapixel macro and 5 megapixel depth sensor. The phone has a 32-megapixel camera for selfie calling as a front. That is, a total of 5 cameras will be available in it, including rear and front.

(Also read – Great trick! Make your smartphone a TV remote, you will be able to search for anything including changing channels)

This phone has been introduced with 6 GB RAM and 8 GB RAM with 128 GB internal storage, which is expandable up to 1TB via micro SD. This phone works on One UI 3.1 based on Android 11.

Most notably its 7000mAh battery

For power, Galaxy F62 has a strong battery of 7000mAh, which comes with 25W fast charging support. For connectivity, connectivity features like 4G VoLTE, Bluetooth 5.0, Wi-Fi, NFC, GPS, GPRS, Micro-USB have been provided in this smartphone.

Share
Facebook
Twitter
Pinterest
WhatsApp
Previous articleNew feature in Google Assistant, it will tell vaccine song at your request
Next articleFlipkart is giving you a chance to win many prizes sitting at home, know all here …