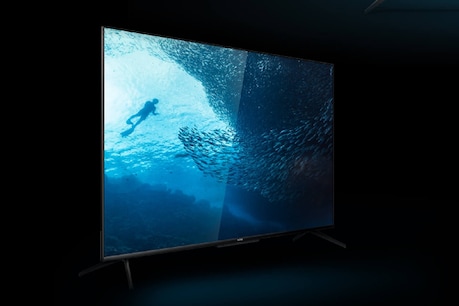 Realme SmartTV 4K will be offered in two sizes – 43 inches and 50 inches.

Reality Smart TV 4K will be offered in two sizes – 43 inches and 50 inches. The TV will have a 4K display which can be an LED-backlit LCD, Dolby Vision and 178-degree viewing angle.

Reality is ready to launch its new Smart TV (Realme Smart TV 4K) in India. The company has announced that its launch will be done on 31 May. Before launching, the company has presented many types of information about its features, and now many specifications and price of this TV have been revealed even before the launch. Tipster Gadgetsdata has given an information by tweeting. According to the report, Reality Smart TV 4K will be offered in two sizes – 43 inches and 50 inches.

The TV will have a 4K display which can be an LED-backlit LCD, Dolby Vision and 178-degree viewing angle. MediaTek processor can be given in the new Reality TV. However, information about the details related to RAM and internal storage has not been found. It is being said that these will work on the Android TV 10 operating system. The TV can support streaming apps, apps like Google Chromecast and Google Assistant. It can get 24W quad-stereo speakers, which will come with Dolby Atmos support.

what will be the price

(Also read- Big rules related to Google and Youtube will change from June 1! Pockets may have to be loose)

phone will also be launched