MDH Owner: Coming from Pakistan in this way, crores of rupees have been accumulated in India… 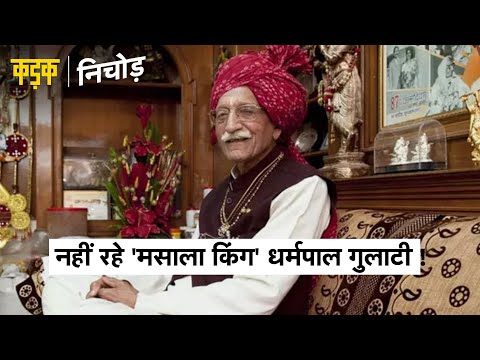 New Delhi: Everyone knows the grandfather who appeared in the MDH spice ad… he breathed his last at 5.38 this morning. He died of a heart attack after recovering from Corona. Come, today we tell you some interesting things about this grandfather (mdh owner) ji, which you have hardly heard. He was born in Pakistan. Let us tell you that in the year 1919, a small shop started from Sialkot, Pakistan was opened by his father Chunni Lal. Today this small empire has turned into an empire of 1500 crores.

was born in pakistan

Gulati was born on March 27, 1923 in Sialkot (Pakistan). After the partition of the country in 1947, he came to India. Then he had only Rs 1,500.Also read: MDH Owner Death: Dharampal Gulati once used to earn by running a tonga, know how he created a business worth crores

Dharampal Gulati has studied till class V. He did not go to school for further studies. He may not have taken much bookish education, but big stalwarts in business consider him iron.

used to run tonga in Delhi

Earning money was the biggest challenge in front of Dharampal Gulati by coming to Delhi. In those days only 1500 rupees were left in Dharampal’s pocket. Out of these 1500 rupees from his father, Dharampal bought a horse and a tonga for Rs 650 and started running the tonga at the railway station. After a few days he gave it to Tanga Bhai and started selling spices by putting a small kiosk on Ajmal Khan Road of Karolbagh.

According to Euromonitor, Dharampal Gulati was the highest-paid CEO of the FMCG sector. Sources said that last year he used to get an in-hand salary of Rs 25 crore in 2018.

were also ahead in charity

Gulati used to donate around 90 per cent of his salary. He was also running 20 schools and 1 hospital. Apart from this, he used to help the needy people from time to time.

Also read: The rule of withdrawing money from the account has changed, these two banks will also be applicable, know all the things related to the new rule

The oldest ad star was

Dharampal Gulati himself used to add all his spices even in old age. Often you must have seen him telling about his spices on TV. He is considered the oldest ad star in the world. Apart from this, he also used many special techniques to make his spices tasty.