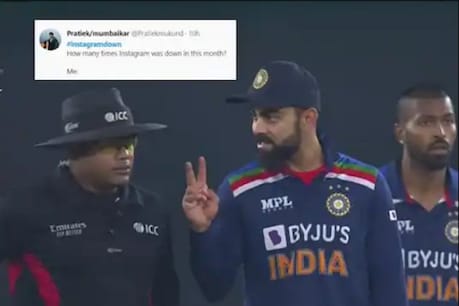 Is Instagram Down? If your Instagram is running slow, or there is a problem with loading and because of this you are checking your internet connection again and again, then yes it may happen that your Instagram is down. Sometimes the message ‘Something went wrong’ or ‘We are working on it’ pop-up on the photo sharing app. Facebook Inc’s social media platforms WhatsApp and Instagram went down globally last week.

Some users also told about the problem in Facebook. It is still not clear why this service has been down. All the users around the world, including India, told about the service down through Twitter.

Me running to Twitter to search if Instagram is down or if it’s my wifi #instagramdown pic.twitter.com/D0XcT181J2

Just 10 days after such a massive outage, the #InstagramDown crash was found again last night. According to DownDetector, the service started going down at around 7 pm and then users around the world were affected by it.

(Also read- Summer has knocked! Buy this powerful cooler in the range of Rs 5 to 6 thousand only, will get 34 liters of storage capacity)

#instagramdownHow many times Instagram was down in this month?

Share
Facebook
Twitter
Pinterest
WhatsApp
Previous articleYou can win lots of prizes and Supercoins from Game Zone on Flipkart App,…
Next articleToday on the Amazon app, the correct answers to these five questions can win you Son…