HomeAppsHow Trump was upset with the law of only 26 words, why...
Apps

How Trump was upset with the law of only 26 words, why could not change… US President Donald Trump and many members of the ruling Republican Party have been expressing their displeasure from time to time over an unclear but important law. Even though the scope for some changes in it cannot be ruled out, but in terms of Internet and social media, this law holds a lot of importance. You also know that due to the recent violence in Capitol Hill Violence, Washington DC, Twitter and Facebook suspended Trump’s accounts.

In the past, there has been a war-like situation between Twitter and Trump and Trump has also talked about taking action on Twitter in a threatening tone many times. But the US President could not really take such a step. Don’t you think some important law is coming in between? How much do you know about that law or system?

read this also :- 5 Historic Blackout : How did the electricity keep going off in India and the neighborhood?

Contents hide
1 The debate on amendments to the laws related to social media is going on.
2 The Donald Trump administration had prepared a new bill to control social media.
3 Symbolic image for Twitter’s regulation policy.

The debate on amendments to the laws related to social media is going on.

Section 230 was added to this Act later. In simple language, this means that whatever websites on the Internet are containing user content, that is, where any user can talk, the platform will not be held legally responsible for any kind of content.

So, why is this law important?

With this 26-word system, you can understand that the great era of social media started. Many platforms like Facebook, Twitter, Instagram are legal on the basis of these words. The second aspect is that due to this system, some other criminal activities including misinformation, propaganda, hate speech and fake news also continued to grow on online platforms.

read this also :- Capitol hill violence: How did Twitter and FB keep taking action on Trump again and again?

With business and social life becoming a part of everyday life, it is also imperative that there are better laws governing social media. As such, section 230 protects social media in a way that they are not responsible for the information coming on the platform. 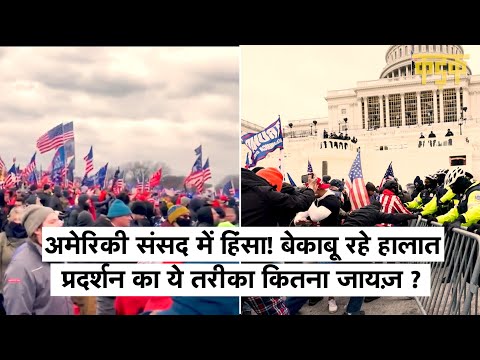 Why was Trump angry and what happened?

Trump has repeatedly targeted social media for the fact that there is no control on opposition ideological talk. To crush the opposition’s social media, when Trump talked about reining in the world’s big companies like Facebook and Twitter, it also happened that Twitter started putting flag, warning tags on those posts of Trump, which are misleading or deceiving. were supposed. During the US presidential election, Trump was seen freaking out like this:

The ‘big tech companies’ have been gifted by the US ‘Section 230’, which has become their shield, but in reality it has become a serious threat to national security and electoral correctness. Our country can never be safe, if this system is continued…

read this also :- What is America’s 25th Constitutional Amendment, from which it is possible to remove Trump

After this, the Trump administration also tried to abolish Section 230 and a new bill was even prepared. But, the plan could not succeed. In fact, removing the provision of section 230 was considered a step to eliminate the fundamental right to ‘freedom of expression’ according to the US Constitution. A single step of crushing it runs the risk of destroying many types of businesses in one fell swoop. The Donald Trump administration had prepared a new bill to control social media.

Experts clearly said that there is scope for change in section 230, but after careful consideration. It is not advisable to do so that you eliminate it completely in one stroke.

read this also :- Sarla Thakral: Do you remember the first Indian woman pilot?

Does this system affect India?

When the world is interconnected, and especially in the virtual world, there are no boundaries, then it is not possible that the matter of any corner should not be connected to any other corner or affect there. Now see that in 2016, the European Union created the Data Protection Regulation System, that too is considered an expanded form of section 230.

read this also :- How do big personalities disappear in China along with thousands of people?

When you visit a website and that web company gives a message to accept cookies, it means that that company is tracking the user. In view of all these aspects, the legal systems regarding internet and social media in India are at a very nascent and weak stage. In such a situation, when countries like India are thinking about making laws in this direction, then the whole debate about section 230 becomes very useful for India. It is worth noting that in India also Amit Malviya, in-charge of BJP’s IT cell, has also accused Twitter on the lines of Trump. twitter their Tweets also called ‘sly media’ As tagged with a warning. In such a situation, you can understand that the debate in America about this becomes very important in deciding the future arrangements in India.